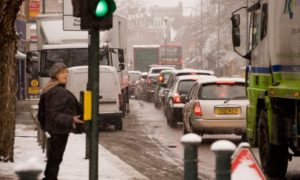 According to Public Health England, the percentage of premature deaths attributable to minute particles known as PM2.5s rose to 5.3% in 2013 in England from 5.1% in 2012. The death rate in London rose to 6.7% from 6.6%. The figures follow significant improvements in air quality across England in 2010 and 2011.

The figures were announced as scientists at King’s College London warned of “high” or “very high” particulate pollution across much of London and south-east England for a second day. People with heart conditions or breathing problems were advised to reduce exercise and to stay at home.

Air pollution: a dark cloud of filth poisons the world’s cities
Read more
Much of the polluted air has drifted in from continental Europe and has been trapped by the cold air which is now spread over eastern England. “It has travelled through industrialised and urban parts of Europe over the last three days, picking up emissions.

“This will add to London’s already elevated pollution concentrations, and we are therefore likely to see widespread ‘high’ particulate pollution across the city with an outside chance of ‘very high’ at some very busy roadside locations,” said a King’s spokesman.

The high pollution levels are expected to drop within 24 hours as warmer, wetter air spreads from the west.

The government’s air pollution forecast today said: “Moderate, locally high, air pollution around London, which has built up due to persistent light winds, should gradually disperse during the day as winds begin to pick up a little. Similar for the pockets of moderate air pollution observed around central England.”

However this figure does not include deaths attributable to the noxious gas NO2 which is largely emitted from diesel engines, the impact of which is proving harder to distinguish from particulate pollution than scientists had hoped.

A spokeswoman for Friends of the Earth said: “There must be proper public warnings when there are bad air pollution episodes like today’s – but rather than people having to restrict their activities it must be vehicles which are restricted so that people’s health is protected.”

… we have a small favour to ask. The Guardian is editorially independent, meaning we set our own agenda. Our journalism is free from commercial bias and not influenced by billionaire owners, politicians or shareholders. No one edits our Editor. No one steers our opinion. This is important because it enables us to give a voice to the voiceless, challenge the powerful and hold them to account. It’s what makes us different to so many others in the media, at a time when factual, honest reporting is critical.

More people are reading the Guardian’s independent, investigative journalism than ever but advertising revenues across the media are falling fast. And unlike many news organisations, we haven’t put up a paywall – we want to keep our journalism as open as we can. So you can see why we need to ask for your help.

If everyone who reads our reporting, who likes it, helps to support it, our future would be much more secure. For as little as $1, you can support the Guardian – and it only takes a minute. Thank you.

NEW DELHI: The Central government has for the first time explicitly acknowledged that pollution is…