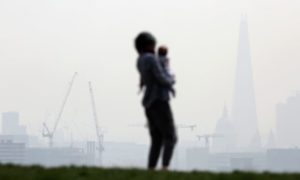 A woman and a child stand on Parliament Hill in Hampstead Heath overlooking a smoggy central London in April 2015. Photograph: Dan Kitwood/Getty Images

Air pollution both inside and outside the home causes at least 40,000 deaths a year in the UK, according to new report, which estimates the cost of the damage at £20bn.

Sources of indoor air pollution include smoking, faulty boilers, gas cookers and heaters, as well as irritant chemicals from new furniture, air fresheners and household cleaning products. House-dust mites, mould and dander from pets can also damage health, according to the report.

The report found unborn and young children were particularly susceptible to air pollution. “The developing heart, lung, brain, hormone systems and immunity can all be harmed by pollution,” the report said. “Research is beginning to point towards effects on growth, intelligence, asthma, and development of the brain and coordination. Harm to babies and children will have an impact that lasts far into the future.”

“When our patients are exposed to such a clear and avoidable cause of death, illness and disability, it is our duty to speak out,” saidProf Stephen Holgate, an asthma expert at Southampton University who led the report. “We now know that air pollution has a substantial impact on many chronic long-term conditions, increasing strokes and heart attacks in susceptible individuals. And now there is compelling evidence that air pollution is associated with new onset asthma in children and adults.”

Dr Andrew Goddard, at the Royal College of Physicians, said: “Taking action to tackle air pollution in the UK will reduce the pain and suffering for many people with long term chronic health conditions, not to mention lessening the long term demands on our NHS.”

Many people in the UK are currently exposed to illegal levels of air pollution. The UK government lost a supreme court legal battle in 2015 and was forced to produce an action plan. If successful, this will cut air pollution to legal levels by 2020 in most cities and 2025 in London.

The new report found that, although the government and the World Health Organization set “acceptable” limits for air pollution, there is in fact no level of exposure that can be seen to be safe, with any exposure carrying a risk.

The report called for a wide-ranging set of measures to tackle the problem, including tougher regulations to limit air pollution such as reliable testing of emissions from vehicles. Whilst Volkswagen actually cheated emissions tests, most manufacturer’s diesel cars produce far more pollution on the road than when being tested. On 3 February, the European parliament failed to veto loopholes in air pollution limits on new diesel cars.

Another measure demanded by the new report is for local authorities to have the power to close or divert roads to reduce the traffic, especially near schools, when air pollution levels are high.

The issue of indoor air pollution also needs more research, said the report: “We must strengthen our understanding of the key risk factors and effects of poor air quality in our homes, schools and workplaces.” It noted: “The drive to reduce energy costs, by creating homes with tighter ventilation, could be making the situation worse.”

National action to fight climate change will also help to cut air pollution, according to the report, which said meeting the UK’s carbon emissions target would lead each year to 5,700 less deaths and fewer hospital admissions for lung and heart problems.

The public can play a part in cutting air pollution too, said Prof Jonathan Grigg, from the Royal College of Paediatrics and Child Health: “We ask the public to consider using public transport, walking and cycling, and not choosing to drive high-polluting vehicles.”

Dr Penny Woods, chief executive of The British Lung Foundation, said: “This landmark report lays out in the starkest terms yet the devastating impact air pollution is having on our health, our children’s health, our economy and society as a whole. [In particular, children] should not have to pay the price for what has happened to the air they breathe.”

Prof Anthony Frew, a respiratory medicine expert at the Royal Sussex county hospital and not involved in the research, said: “While this report is interesting, its findings have to be seen in the context that on average we live longer, healthier lives than we did in previous generations, and that much of this is due to falling pollution levels. Furthermore, the ‘deaths caused by air pollution’ are generally considered to be deaths that are brought forward, rather than deaths that would not have happened.”

… we have a small favour to ask. The Guardian is editorially independent, meaning we set our own agenda. Our journalism is free from commercial bias and not influenced by billionaire owners, politicians or shareholders. No one edits our Editor. No one steers our opinion. This is important because it enables us to give a voice to the voiceless, challenge the powerful and hold them to account. It’s what makes us different to so many others in the media, at a time when factual, honest reporting is critical.

More people are reading the Guardian’s independent, investigative journalism than ever but advertising revenues across the media are falling fast. And unlike many news organisations, we haven’t put up a paywall – we want to keep our journalism as open as we can. So you can see why we need to ask for your help.

If everyone who reads our reporting, who likes it, helps to support it, our future would be much more secure. For as little as $1, you can support the Guardian – and it only takes a minute. Thank you.

How can I make my outdoor Node/Pro’s data public?